Tropes and Why I Love Them

Not everyone knows what a trope is, and that’s okay. Thankfully, there’s an entire site devoted to them you can get lost in for hours. But before you do, here’s a nice definition of tropes from the website:

“A trope is a storytelling device or convention, a shortcut for describing situations the storyteller can reasonably assume the audience will recognize. Tropes are the means by which a story is told by anyone who has a story to tell… Tropes are not the same thing as cliches. They may be brand new but seem trite and hackneyed; they may be thousands of years old but seem fresh and new. They are not bad, they are not good; tropes are tools that the creator of a work of art uses to express their ideas to the audience. It’s pretty much impossible to create a story without tropes.”

Whether you’re an author or avid reader, putting names to some of the tropes you’ve encountered or want to use can be highly entertaining. Personally, I like to take a few of the more traditional tropes and turn them on their heads. In Bad Unicorn, the Early World Librarian Connection wrote: “Fans of speculative fiction, fantasy adventure, classics like Narnia and modern stories of warlocks and witches will howl with laughter as readers recognize old and new tropes of the genre.” Now that’s the kind of review I’m happy to take. And in case you’re curious, there are over 30 tropes that deal specifically with laughing. Ha!

The Duck is Mocking Me… Again.

Sometimes I wake up with weird things in my head. The other morning it was a poem. I’m not sure why, only that the sounds of the neighbor’s duck pulled me from my blissful slumber. Also, I think it means I need to get out more.

The duck is mocking me again,

Trumpeting his freedom through the morning fence,

Another day of sun and wind and sky and earth,

As I roll out of bed at his joyous bell,

And shut the window.

According to Plato we should prevent children from hearing “any casual tales which may be devised by casual persons… For a young person cannot judge what is allegorical and what is literal.” As a casual person who’s written causal tales, this sentiment has caused me a moment of reflection. As a philosophy major, I came to like Plato. A lot. And not just because I have a thing for togas and an aversion to hemlock.

I suspect Plato was purposefully being ironic when he wrote those words in The Republic. If we could govern ourselves on reason alone (and achieve a purely rational republic in the process) our cringe-worthy gotcha candidate debates would be less TMZ and more C-SPAN. Possibly even C-SPAN 2. But the world isn’t going to allow itself to be organized along purely rational lines.

So all those storytellers, poets, and musicians in ancient Greece are simply today’s campaign engineers, meme creators, and TikTok posters. We are like children in our republic: unable to parse emotion from reason, quick to pick sides and throw tantrums, easily swayed by the authority figure promising rewards or threatening punishment. I think Plato would be in favor of the censorship now being hotly debated across our social media platforms as he believed the freedom democracy enables is the very thing that threatens its existence. Talk about a high-wire act.

So I interpret Plato’s warning as we adults need to grow up a little (maybe a lot) and stop believing all the fantasy being told to us as facts. Kids, on the other hand, should never be dissuaded from reading and taking the allegorical into their minds and hearts. I would be quite happy if my children pondered the words of Gandalf in The Lord of the Rings when he said, “It is not our part to master all the tides of the world, but to do what is in us for the succor of those years wherein we are set, uprooting the evil in the fields that we know, so that those who live after may have clean earth to till.”

Are you one of the few who received a version of Bad Unicorn with a fairly substantial misprint? It’s likely less than 20 of these versions exist, so if you got to a particular chapter and started scratching your head, let me know. Aladdin will send you a new copy, and you can keep yours as a treasured collector’s item. Just message me what the error is and you’re a winner—lucky you! 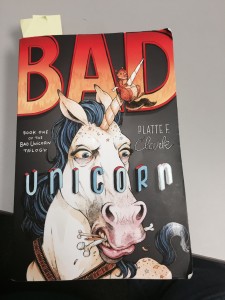 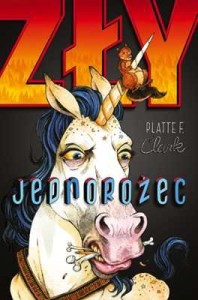 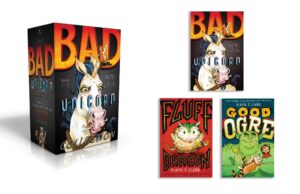